As the weather continues to flirt with freezing temperatures at night, I'm chugging right along with my winter project list.

This month, I can check off two more: the 3-section compost bin and the hog house. 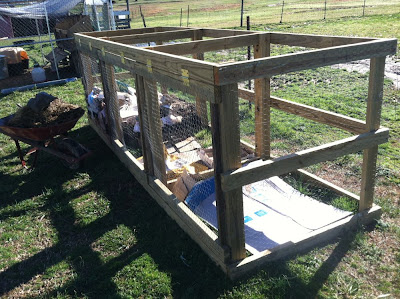 Compost Bin
This one was originally going to be made of free pallets, but I decided to make it right because it has to be around for a long, long time. As I often do, I find plans for projects that others have done and modify it to my liking. On this particular one, I kept the 3-section idea that almost everyone does, so I can rotate compost every three years. When the first section is filled up, I move on to the next one, and so on. When the third one is filled, I take the compost from the first one and apply it to the garden.

The whole thing measures 12' x 4' x 4' and is made entirely of 2x4s and 1" chicken wire. I built doors on the front of each section that open from the bottom, so I can fully open them to shovel out the compost when it's ready. There's no top currently, but I wanted to see if or why that would ever be needed. The air flow and rain actually helps the composting process, so I didn't want to cover the material too much. It might look messy, but that's the beauty of not really having neighbors!

So far I'm throwing in kitchen scraps, rough cardboard (nothing shiny at all), soiled chicken bedding mixed with hay, rabbit droppings, and donkey manure. I aim to fill a bin each year, but at the rate I'm already going, that first one will be filled in a few months! 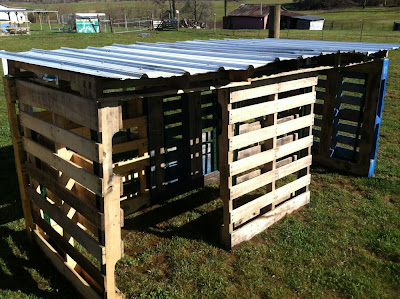 Hog House
Once again, I looked at a few hog house plans online and in books, mixed in a fencing plan I saw online, threw in a few of my own ideas, and viola! One cheap and sturdy hog house.

The hardest part of this one was finding pallets to use, as I live pretty far from any warehouses or anything that would use pallets. Most places I went (like the local feed store) told me that they trade their pallets back in at the end of each month. If you get pallets, make sure to ask the store first, as many give them away, but for many stores, you'd actually be stealing from them. Also check the 'free stuff' section of Craigslist. I find pallet giveaways all the time on there.

The most expensive part of this project was the t-posts. I bought 2 for each pallet, for a total of 12. Since pallets are about 4 feet tall standing up, I bought 5.5' t-posts to allow about 6 inches to stick up (while 1' would be in the ground). This 6-inch bit actually fits into the pallets used for the roof, securing it even further. After I built this hog house, we had a windstorm at 35mph with 45mph gusts, and the house didn't even budge.

To assemble the house, start on one corner and install a t-post with a fence post pounder. Measure and install the next t-post so you can slip the pallet over the top of both posts. Repeat this all the way around until you have the shape and size you want. On mine, I decided to make it three pallets long and one pallet deep. I also put a pallet in the front center, to allow a bit more of a wind break and shade, while keeping the inside open. This also helps secure the roof, as well.

For the roof I used three pallets connected with two scrap pieces of 2x4x10 going straight across the bottom. When they replaced my roof in November, I had them save the old metal for me, so I used that for the top. I was going to go with cheap spare screws, but decided to buy good roofing screws for this because I don't want it blowing away (and also I have a barn to re-roof soon!) 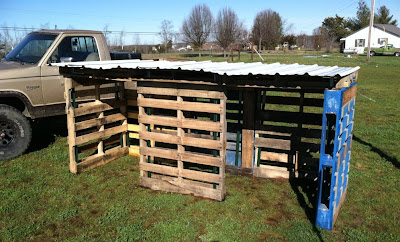 Eventually, if I get more than one or two hogs, I may go to two pallets deep, but that's the beauty of this house: it's expandable, mobile and cheap! Each year, when I rotate the gardens and hog pasture, I can pull up this pallet house and move it to wherever I want in only an hour or so. I may also cover the walls with the old metal roofing, keeping them separate on each pallet for mobility, but we'll see how it works as it is, first. The only part you'll need two people for is lifting the roof. It's heavy!
Posted by Shawn at 8:14 AM